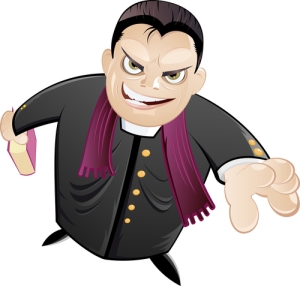 Transgenders will molest little girls in the bathroom!

Gays will destroy the sanctity of the institution of marriage! Of course, it’s unclear just what gays could do to marriage that Donald Trump, Newt Gingrich, and OJ Simpson haven’t already.

Presto! People are all riled up over nothing.

Back when President Obama first supported gay marriage, the Christian right erupted. Julaine Appling, president of Wisconsin Family Action, said: “America needs to continue to support and strengthen and preserve the traditional family model of a mom and dad.”

Likewise, African American pastor, Dwight McKissic, a Southern Baptist and former Obama supporter, berated Obama for betraying the black church and Christianity.  He warned, “America is now a candidate for the same judgment received by Sodom and Gomorrah.”

They have READ the Bible, haven’t they? This might be excusable if McKissic and his ilk had never read the Bible and spoke from ignorance.  But since McKissic has presumably read the Bible many, many times, he must know the Sodom and Gomorrah story says nothing about loving, consensual gay sex. It tells of a mob contemplating gang rape, an act of violence and humiliation.

McKissic must also know that the Book of Ezekiel says the sin of  Sodom’s people was that they were “overfed and unconcerned; they did not help the poor and needy.” Sodom was a rich city that was not interested in sharing and was inhospitable to immigrants. Sound familiar?

Obsessed about sex; not love of neighbor    While obsessing over sex, the Christian Right ignores hundreds of Bible passages about love for one another and social justice. Preachers are very quiet indeed about:

Surely, an agency that helps ensure that parents come home from work alive should enjoyr the enthusiastic support of those who want to preserve “the traditional family model of a mom and a dad.”

Whatever became of the courage of the Prophet Nathan?
The Bible tells us of the courage that Nathan demonstrated in confronting a mighty King.  King David lusted after another man’s wife, slept with her, arranged for her husband’s death, and then added her to his extensive harem. God instructed Nathan to confront the king on his sin.

Though the Bible doesn’t say so, Nathan probably dreaded this task. King David could have had Nathan tortured, thrown into prison, and even executed. Many prophets, including the beheaded John the Baptist, died grizzly deaths for teachings that offended the rich and powerful. Yet, Nathan went.

Nathan set a trap for King David by telling him a story about a rich man, with many sheep and cattle, and a poor man, who had but one beloved lamb.  When the rich man had a visitor one day and wanted to prepare a meal, he took the poor man’s lamb and cooked it.

The story so outraged King David that he exclaimed, “That man deserves to die!”

Nathan dared to point a finger at the mighty king and said, “You are that man!”

Cheering for the Military Industrial Complex
But instead of pointing a finger at America’s rich and powerful for grinding the poor beneath their heels, the Christian Right is busy waving the flag and cheering on the Military Industrial Complex. Their insatiable appetite for our tax dollars generates massive unemployment and leaves many children hungry, homeless and poorly-educated.

One notable Christian minister who did demonstrate the courage of Nathan was Martin Luther King. He bravely opposed the war in Vietnam and walked a very lonely path–until he paid the ultimate price. King spoke out unflinchingly against the evil before him:

I speak for those whose land is being laid waste, whose homes are being destroyed, whose culture is being subverted.  I speak for the poor of America who are paying the double price of smashed hopes at home and dealt death and corruption in Vietnam.  I speak as a citizen of the world, as it stands aghast at the path we have taken.  I speak as one who loves America … A nation that continues to spend more money on military defense than on programs of social uplift is approaching spiritual death.

King has been dead for nearly half a century, yet America’s wild, out-of-control military spending goes on and on. The American war machine never tires of killing and terrorizing people in other nations and sending our young people to fight and die. Yet, the Christian Right sees no evil at the Pentagon or Bechtel or Halliburton.

And what of the sin of usury? Who even knows what usury is these days? Despite attending thousands of religious services in my lifetime (Catholic, Protestant, and Jewish), I have yet to hear a message from the pulpit denouncing usury.

Usury is sometimes defined as lending money at exorbitant interest rates. However, as Thomas Storck points out in his essay, “Is Usury Still a Sin?”

Usury as it was understood for centuries meant the charging of any interest on a loan simply by virtue of the loan contract, that is, without any other justifying cause except that money is being loaned….

Pope Benedict XIV’s encyclical of 1745, Vix pervenit stated:  The nature of the sin called usury has its proper place and origin in a loan contract . . . [which] demands, by its very nature, that one return to another only as much as he has received. The sin rests on the fact that sometimes the creditor desires more than he has given . . .

Even if we agree that “reasonable” rates of interest are justified, I can’t help but notice that my Visa statement is not reasonable. Balance transfers are charged at a rate of 19.49%—and the wrath of the great God, JP Morgan, will rain down upon my head if I dare to miss a payment–or even send it late.

Predatory lenders, just one of which are the payday loan companies, rape underpaid working people desperate for a little cash to tide them over to their next paycheck. Missouri allows such companies to charge an APR of 1950% for a 14-day $100 loan! That’s not a typo– 1950%!

But the religious right is silent.

Five Non-negotiable issues for Catholics   A few years ago, I encountered a pamphlet at the local Catholic Church, instructing Catholics to vote for candidates who supported the Church’s position on five non-negotiable issues. Opposition to gay marriage, euthanasia, and even stem cell research made the non-negotiable list; usury, slashing social programs, unnecessary war, paying poverty-level wages, and torture did not.

Are loving, same-sex relationships REALLY more offensive than an unprovoked war that kills hundreds of thousands of innocent people? Is stem cell research really worse than applying electric shocks to the testicles of prisoners? Are they kidding?

Fortunately, Pope Francis is talking sense on some of these issues, but real change lags far behind him. Religious leaders with the courage of Nathan and MLK are scarce on the Christian Right–and much of the left.  It is far easier to condemn the so-called sins of a despised minority like the LGBT community than to point an accusing finger at the likes of Visa/MasterCard, Walmart, and Bank of America.

But who can blame these for-profit ministries?
There is so much to be gained by preaching the word of the ruling class, instead of the “archaic” teachings of Jesus and the prophets. The Kingdom of Heaven is indeed right here on Earth for those who betray their faith and help the rich exploit the poor and exterminate the middle class. Influential ministers can have it all: mansions; limousines and sports cars; private jets; their own television programs; and the prestige that comes with mingling with the rich and powerful.

Pat Robertson’s personal wealth alone is estimated at a whopping $100 Million. Not bad. To think that Judas settled for a mere thirty pieces of silver.