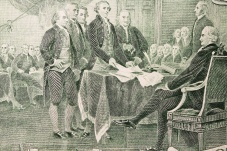 In death as in life,  Justice Antonin Scalia is the object of news media adulation. The media called him “a lion of the Constitution” and a staunch Originalist, steadfast in interpreting the Constitution just the way our Founding Fathers intended.

Media Fails to Ask Questions
But when the media uncritically accepts Scalia’s claim to being an “Originalist,” it fails to ask some important questions:

Our Founding Fathers didn’t love corporations like Scalia did.
Scalia’s claim to being an Originalist is immediately rendered nonsensical by his adherence to the doctrine that corporations are people. The word “corporation” doesn’t even appear in the Constitution. Further, since the American Revolution started partly due to outrage over an alliance between the crown and the British East India Company, our Founding Fathers generally distrusted corporations and tried to keep them on a short leash. Corporations were granted time-limited charters and only allowed to exist if they served the common good. Over the years, these limitations were peeled back, not by the President and Congress, but by activist conservative Supreme Court Justices.

Corporations become People
Corporate personhood originated long after the deaths of our Founding Fathers. It first appeared in the 1886 case of Santa Clara v. Southern Pacific —eighteen years after ratification of the Fourteenth Amendment upon which corporate personhood is allegedly based. Even then, it wasn’t because of a decision of the Supreme Court, Instead, a former railroad executive employed by the Court sneaked it into head-notes, a summary of the decision. http://tinyurl.com/jv38cvd

Rights of Corporations Win Over Rights of Human Beings
A true Originalist would reject corporate personhood and demand a return to tight regulation of corporations. Instead, self-proclaimed Originalists have shown far more concern for corporate rights than for the rights of we the people. Geoffrey Stone, law professor at the University of Chicago, in an article on the First Amendment, leveled this criticism at Chief Justice William Rehnquist. Since these justices were such close allies, this criticism can also be applied to Scalia.

“Not only was he the justice least likely to protect these (individual) freedoms, but his general passivity toward these freedoms cannot be defended as principled, coherent or neutral. When all was said and done, Rehnquist’s First Amendment belonged to corporations, wealthy political candidates, and churches.”  http://tinyurl.com/jcyyd7x

that government may not limit political spending by corporations in candidate elections. Their concern for corporate “free speech” rights–their term for limitless, thinly-veiled bribes given in the form of campaign contributions—trumped their concern for democracy and the integrity of our elections.

The four dissenting Justices argued that a flood of corporate money would corrupt democracy. And so it did. When the Brennan Center for Justice analyzed the 2014 Senate races, they found outside spending more than doubled since 2010, to $486 million, with outside groups providing 47 percent of total spending in 10 competitive races.

Fourth Amendment Thrown Out to Wage War on Drugs
The truth is that “Originalists” read the Constitution very narrowly (or ignore it altogether) when it comes to rights of the average person, but give very expansive interpretation when it comes to the rights of wealthy people and corporations.

Despite their reverence for corporate First Amendment rights, Scalia and his Originalist cohorts didn’t hesitate to shred the Fourth Amendment protections against unreasonable search and seizure to facilitate the GOP’s “War on Drugs.” In her book, The New Jim Crow: Mass Incarceration in the Age of Colorblindness, Michelle Alexander charges that although drugs are used fairly equally by people of all races, Republicans aimed their drug war squarely at minorities.

Ms. Alexander eloquently documents that extreme discrimination in the enforcement of drug laws has helped bring about mass incarceration of people of color, often for minor offenses. Scalia and his allies repeatedly backed police in invasive searches for drugs, leading some commentators to charge that they had created a “drug exception” to the Fourth Amendment. Again, so much for his adherence to “Originalism.” Many ruined lives and decimated communities of color are part of Scalia’s legacy.

You’re Innocent? Too Damn Bad!
Scalia’s lack of concern for the rights of ordinary people extended even to the inalienable right to life itself. His indifference to wrongful convictions has undoubtedly paved the way for

the execution of many innocent people. In the 1993 case of Herrera v. Collins, the Court refused an appeal from a man convicted of murder who sought reconsideration of his conviction based on new evidence.

Scalia wrote, “There is no basis in text, tradition, or even in contemporary practice, for finding in the Constitution a right to demand judicial consideration of newly-discovered evidence of innocence brought forward after conviction.”

Likewise, Scalia refused to consider new evidence that might have overturned the conviction of Anthony Davis and spared him from execution. Scalia said, “This Court has never held that the Constitution forbids the execution of a convicted defendant who has had a full and fair trial, but is later able to convince a habeas court that he is actually innocent.” Of course, it is utterly absurd that the Constitution would anticipate and delve into such specifics. That’s why we have judges.

No Need to Protect Voting Rights
Scalia and his Originalist friend, Clarence Thomas, both voted with the majority in refusing to protect the voting rights granted by the Fifteenth Amendment. But then, Founding Fathers from slaveholding states like Georgia and the Carolinas would undoubtedly have approved. In 2013, Scalia joined the majority in essentially gutting the Voting Rights Act in the case of Shelby County v. Holder. The majority opinion said, “While any racial discrimination in voting is too much, Congress must ensure that the legislation it passes to remedy that problem speaks to current conditions … The conditions that originally justified these measures no longer characterize voting in the covered jurisdictions.”  Racial discrimination was at an end, according to the majority. They did this, knowing that racists in a number of states had vote suppression legislation ready, awaiting the green light from the Supreme Court.

This see-no-evil decision set off a flurry of activity in restricting voting rights. By 2014, voters in 22 states faced tougher voting restrictions than in the last midterms. These changes include voter ID requirements, cutbacks to early voting and voter registration opportunities, and other changes to voting rules. Many critics charge that these changes are deliberately aimed at making voting more difficult for minorities, seniors, and students—key Democratic constituencies.

Further, this decision came after two hotly-disputed Presidential elections. An investigation by the British Broadcasting Company concluded that the 2000 election was stolen in Florida when minions of Governor Jeb Bush illegally “scrubbed” voter lists to deny tens of thousands, perhaps as many as 100,000, of mostly-African American voters their Constitutional right. The Federal Elections Commission, concurred, saying that “countless” Florida residents were denied the right to vote and this disenfranchisement fell most harshly on the shoulders of African Americans. Bush “won” Florida, and therefore, the Presidency, by only a few hundred votes.

In the 2004 election, national exit polls showed that John Kerry had won the election, but vote tallies showed Bush the winner. Exit polls are considered to be so accurate that they are used to detect election fraud. Throughout the nation, odd events suggested an orchestrated effort to swing the election to Bush. Just one is the infamous images of African Americans in Ohio, standing in the rain for hours, waiting to vote in polling places with insufficient and even broken voting machines.

In both elections, the key to Bush’s “victory” was winning a state in which the state official entrusted with ensuring a fair election was also Bush’s campaign chair (Kathrine Harris in Florida in 2000 and Ken Blackwell in Ohio in 2004)–a mind-exploding conflict of interest. Still, the Supreme Court said discrimination was a thing of the past.

Supreme Court Invents Reason to Make Bush President
Justice Scalia should know about those elections, since he was a key player in the Supreme Court’s unwarranted intrusion into the 2000 Presidential campaign. Legal scholars and ordinary citizens alike have turned up their noses at the brazen partisanship of the Republican majority, who stopped the vote recount in the state of Florida, claiming it could do irreparable harm to G.W. Bush.

The majority expressed no concern whatsoever for harm done to Al Gore or to the voters, who ought to have a right to an honest election. Justice Scalia made clear the Court acted to prevent Bush from falling behind in the tally, thus raising questions about his legitimacy should the Supreme Court later declare him the winner.

One scholar noted that the ultimate test of a fair judicial decision and fair judges is whether the ruling would have been the same if the positions of the parties were to be reversed. Undeniably, the five Republican Justices would not have intervened on behalf of Al Gore were he in Bush’s position. The majority also said (bizarrely) this ruling should not be used as a precedent, though creating precedent is the Court’s job.

GET OVER IT!
When challenged about Bush v. Gore, Scalia was unable to intelligently defend the decision, and responded with a childish, “Get over it!” Apparently, Scalia thought we the people should not concern ourselves with the integrity of our elections and the legitimacy of our President.

While it is impossible to know what would have happened if Gore had become President, it is fairly certain he would not have appointed conservatives John Roberts and Samuel Alito to the Court. Scalia’s intrusion into the election preserved the 5-4 conservative majority that has displayed such contempt for the rule of law.

Gay Marriage–a Judicial Putsch.
In the case of Obergefell v. Hodges, which legitimized gay marriage, Scalia wrote a scathing dissent. He referred to it a “judicial Putsch” that poses a “threat to American democracy.”

Incredibly, after all the 5-4 decisions in which Scalia and his conservative cohorts inflicted the will of the minority on the American people, Scalia threw a tantrum when this decision didn’t go his way. He actually challenged the very legitimacy of the Court, noting, “the Federal Judiciary is hardly a cross-section of America … A system of government that makes the People subordinate to a committee of nine unelected lawyers does not deserve to be called a democracy.”

Maybe Scalia got one thing right. Rulings by five unelected lawyers in particular have done much to make America a nation that does not deserve to be called a democracy.